My son has Craniosynostosis, but what is it and how will they fix it?

As most of you know my six-month-old son Ashton has major surgery in October for a condition affecting his skull. I thought I’d share what the condition he has actually is and what the surgeons will do to resolve it.

The view from above of how a skull should look at birth. Note the gaps in the different plates.

The name of the condition that Ashton has is; Craniosynostosis. When a baby is born it’s skull is made up of a number of plates that are not yet fused together. This is to enable the skull to grow in the early stages of life.

In children with Craniosynostosis the plates fuse together too early. This can be in the womb or after birth. There are several different types of this condition as it depends on which suture, (the gap between the plates), fuses.

Types of Craniosynostosis and Ashton’s 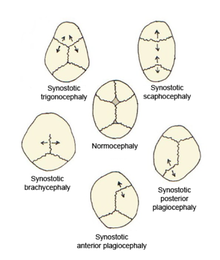 As you can see for the illistration there are five main types. The centre example is how it should be.

The main types are:

I will concentrate on Scaphocephaly as that is what Ashton has.

The term is from Greek skaphe meaning ‘light boat or skiff’ and kephale meaning ‘head’ describes a specific shape of a long narrow head[1] that resembles an inverted boat.

In his case the sagittal (centre) suture closed early. This means that his head will not grow sideways until he has the surgery. When he was born the doctors could not feel any gaps between Ashton’s skull plates. They thought at the time the plates had simply overlapped as that is pretty common.

Over the next couple of months we noticed that his forehead looked as if it was bulging out a bit. He was taken to see the GP and they referred him to see a paediatric consultant at our local hospital.

They took some x-rays and a MRI scan then sent them off to a specialist in Edinburgh. Our hospital although big deals with more general medicine. Any major surgery requires significant travel.

The specialist got back to them and arranged an appointment to see him in Edinburgh, 200 miles away and asked that an CT be done before he visits. So he had the CT scan and his mother took him to the appointment in Edinburgh while I looked after our other son.

Conformation and next steps

The consultant at our hospital wasn’t keen to say it was Craniosynostosis but to be honest it was pretty obvious. I must note that although his skull is growing differently than normal, Ashton has developed if anything better than the checklists they use these days expect.

His mother travelled down to Edinburgh to attend the appointment at Edinburgh Sick Kids Hospital.

As soon as she arrived, as Ashton was asleep the doctor caught a view side on of his head. He immediately said “you can tell by just by looking at his head that he needs an operation.”

The doctor took her hand and put it to the point where his skull has fused and then to another point where it hasn’t. She told me that the difference is very obvious.

The doctor then explained the next steps. He explained to her that Ashton will require an operation in October. The reason for the wait is because; from eight months onwards is his blood volume will be a lot higher and therefore this reduces the risk involved.

He went on to explain the surgery itself. He detailed how they will cut a section from the centre of his skull and then cut that piece into three. The bone will then be flattened before being put back in position.

Once he is out of surgery he will be in High Dependency for a few days. There will be a drain from his head which is only in for usually two days. Amazingly once his eyes can open and they are happy with him, he could be home within five days to a week.

There is little aftercare needed except a wound check seven days after he has been discharged.

After that, they expect him to develop as normal and lead a normal life. What fascinates me is that he has major surgery and can be home and happy within a week. There will be a scar across the top of his head but they say that it will fade overtime.

Whilst his mother and I are nervous, we know that he is in the best care possible. The fact he can be home within a week shows how far medicine has come.

I would to add that the surgeon stated that although it is mainly for cosmetic reasons. They couldn’t risk leaving it incase complications such as pressure to the brain occured.

It doesn’t seem to have affected him in any way that we can see. He’s a happy boy who loves playing with his brother and screeching away.

Thank you from his mother and I for all the kind messages of support that you have sent us. I will let you know how he gets on at the time.

I do not get paid to write and rely solely on donations to keep the site going. It also helps me support my children in a way I never thought possible. If you’d like to make a donation you can do so via PayPal by clicking here or visiting the donate tab in the menu.

All my articles are unfunded but if you’d like to make a donation to support my writing it will help me continue to research and write informative content.